As competition intensifies in every segment of the vehicle market, manufacturers seek to differentiate their products without incurring additional cost. One of the most effective ways to endow a vehicle with a ‘premium’ feel is through improved refinement. For a damper manufacturer such as BWI Group, the brakes and chassis systems specialist, this means improving ride comfort without deteriorating vehicle handing and safety.

To extend the performance of conventional passive dampers, BWI Group is developing a new technology that replaces a conventional hard bump stop with a hydraulic compression stop (HCS) integrated into the damper. Such damper concept allows to better optimise the damping over the whole wheel travel to secure better road isolation.  The new system is not only more tuneable than traditional bump stops, leading to better vehicle dynamic performance, but improves NVH by  reducing peak forces transmitted to the vehicle body at the limit of travel.

Cushioning the so-called ‘spike’ loads that normally occur at the limit of compression allows chassis designers to make greater use of the available damper travel to improve occupant comfort and chassis refinement. It also allows the vehicle body to be lighter because the strength and stiffness requirements at the top mounting are lower for the same standard of refinement and durability. A heavily laden vehicle that is more likely to bottom its suspension on bumpy roads, can do so without transmitting damaging loads into the body structure.

“At the top end of the market, adaptive suspension technology such as MagneRide virtually eliminates the compromise between ride comfort and body control,” explained Roman Bielak, BWI Group’s Technology Development Manager. “The challenge with passive dampers is to retain the price advantage while closing the performance gap to adaptive systems. HCS is an important step towards this.”

HCS is a development of BWI Group’s established hydraulic rebound stop (HRS) technology, which has been re-optimised for use in compression rather than rebound. Both HRS and HCS reduce the shocks transmitted to the vehicle body at the limits of suspension travel by dissipating the energy hydraulically in the damper fluid. HCS is being developed in two different configurations, to suit applications requiring either high or low damping levels.

The high level damping arrangement is achieved by adding a sealed hydraulic chamber with a by-pass to the damper’s existing compression valve. The separate chamber permits very high damping forces to be generated without influencing the damping over the remainder of the suspension travel.

For applications requiring lower levels of damping, BWI Group uses a damper tube swaged to give two diameters. The larger diameter is the main damper valve, the smaller engages a second valve at the chosen threshold of travel, before the limiting stroke is reached. This design gives greater opportunity for damper tuning but the maximum damping force must be limited so that oil aeration does not degrade the base damper performance.

“We are developing two HCS technologies because different vehicle applications each have specific priorities,” said Bielak. “Both approaches improve the comfort, refinement and durability of the vehicle but one offers greater potential for fine tuning while the other provides higher levels of damping.”

Though aimed initially at medium-range premium passenger cars, Bielak believes that HCS could be particularly helpful when applied to hybrid or electric vehicles which are derived from existing models, because it avoids any major suspension changes. “The technology copes well with the additional weight of a large battery pack and satisfies the lower cabin noise levels required when driving in electric mode by ensuring equally low levels of transmitted noise from the suspension,” he said.

Customers are currently evaluating the low-damping variant of the HCS system, which has been confirmed for production in 2018. 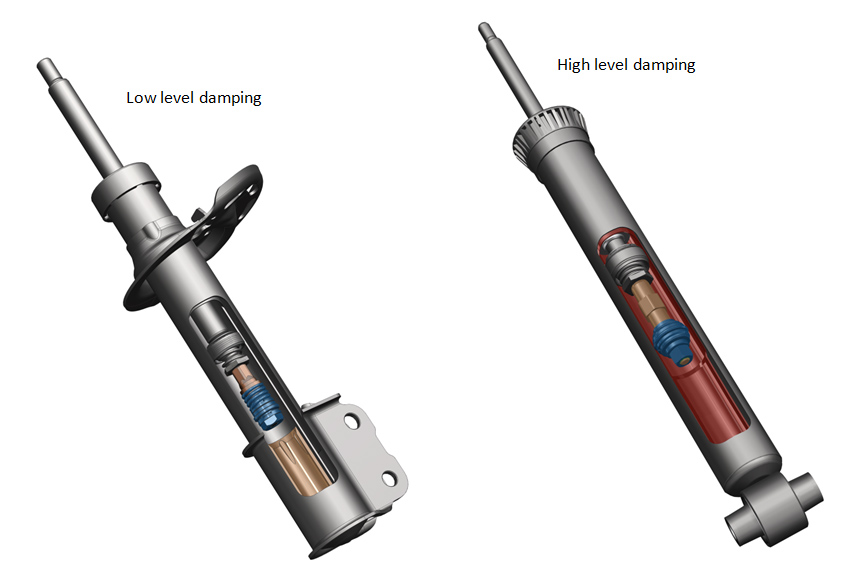 A new technology that replaces conventional hard bump stops with hydraulic compression stops integrated into the dampers is being developed by global braking and chassis systems specialist, BWI Group